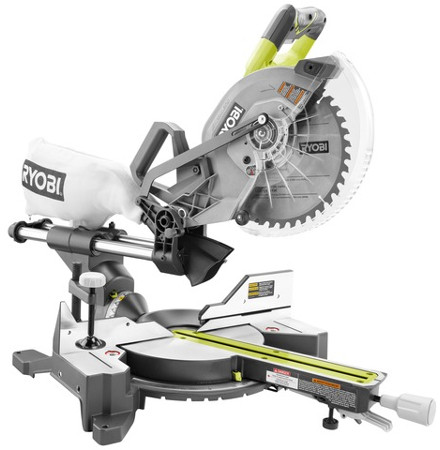 The Ryobi cordless miter saw is a solid choice if you’re in the market for a battery powered model. It offers several benefits over some of its competitors, and it has the obvious selling point of being free from cords.

Going cordless makes the most sense for those doing outdoor projects, or renovation and framing projects when power is not readily available. Generators are always an option in these situations, but that can be a real headache to deal with unless you have multiple people using various tools. If that’s not usually the case, then going cordless may just be your best choice.

This model from Ryobi is a good quality miter saw with great user reviews. However, it’s not to a point of what I would call market saturation. Most people have not heard of this model, and there simply are not many reviews to see online.

So I’ll make sure to go over all the features so you can get the information you need to make an informed decision before deciding on a cordless model. But first, here’s the promo video the manufacturer put out, in case you haven’t seen it yet:

Out of the box, this miter saw comes with a vice clamp, a blade wrench, crosscutting blade, and a dust bag.

Related articles:
Complete guide to miter saws
Which miter saw will work best for you
Other Ryobi miter saws
Other Cordless miter saws 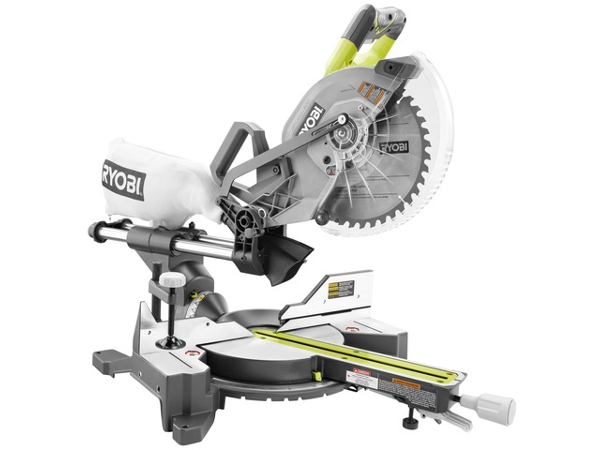 Ins and Outs of the Cordless Feature 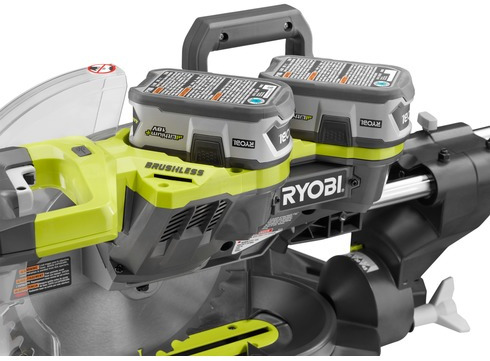 This model from Ryobi is completely cordless, and utilizes dual 18v batteries for its power source. It can handle (according to the manufacturer) up to 370 cuts before needing a recharge.

The batteries are lithium ion technology, so they should last a long time and should not develop a ‘memory’ as many of the previous generation battery-powered tools had a problem with. However, they also work with Ryobi’s nickel-cadmium 18v batteries.

They use their brushless technology to help make the batteries last longer, plus reducing the maintenance required on the miter saw in general, and giving the motor longer life.

And another bonus to using Ryobi’s cordless miter saw is that it’s part of their ONE+ battery system, which works with multiple tools.

The obvious benefit to the Ryobi cordless miter saw (other than the cordless factor), is that it’s a sliding model. This makes for really impressive cutting capacities, and to learn more about the differences in general, see this article on miter saws.

The crosscut capacity for this saw set at a 90-degree cut is 12″, which is pretty standard for a 10″ sliding miter saw. The 45-degree max crosscut width is 8″, which is also standard.

This saw can cut through a dimensional 4×4 post in a single cut, which is not always the case with 10″ miter saws, so I would definitely see this as a plus. If you’re doing any kind of outdoor work like gazebos and decking, cutting 4×4 posts is pretty common, so this is a handy feature. 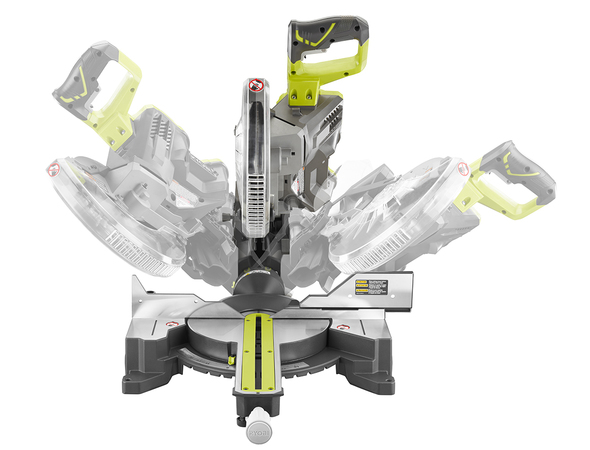 This miter saw is a dual bevel model, which accounts for about half the miter saws I’ve reviewed here on ThePowerToolWebsite. The alternative to this is the single bevel, which only tilts to the left.

So the dual bevel (tilts left and right) is a nice bonus feature for basic use. With many users, there may or may not be a lot of reasons to need the dual bevel. But sometimes you’ll find that depending on how you’ve marked your cut, or which side of the board is the flattest vs which end is the cutoff side, having dual bevel can definitely be handy.

However, where this benefits the most is on renovation projects and construction projects, when doing finish carpentry, specifically crown molding. If you do a lot of crown molding, or if you have a crown molding project coming up, getting a good dual bevel miter saw is a wise choice, as it makes the compound cuts required for crown molding’s angles much easier to set up. 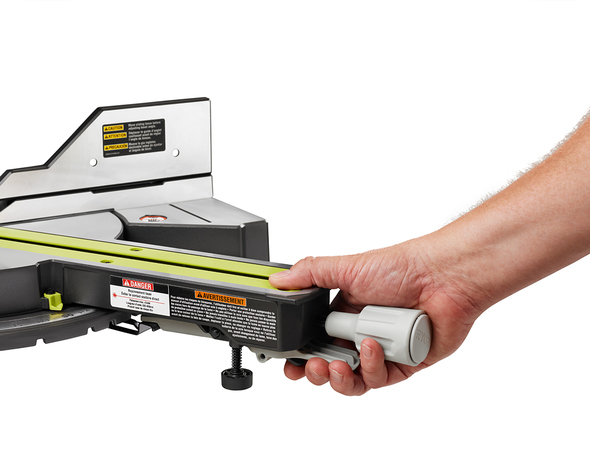 The miter abilities on this saw are fairly standard, nothing special but good enough for most projects. It has 45-degree left and 50-degree right adjustment. The 50-degree is handy, as there are times you need to go beyond the standard 45 and having at least one direction that goes beyond that can be helpful.

Like most other models, the Ryobi cordless miter saw comes with positive stop detents on the miter gauge. It has a release lever that locks into these detents, which are at all the common angles used in various applications. This includes these angles: 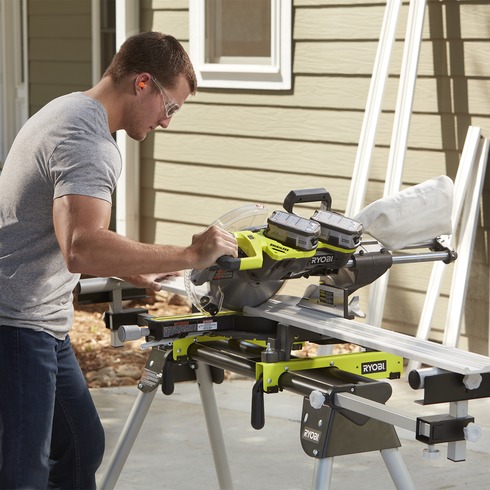 For basic trim molding projects, this saw will perform very well. It has the dual bevel feature which makes crown molding jobs go much easier. It’s got a tall fence, that does extend, so it supports base molding vertically, and it can support nested crown molding against the fence with material up to 5-1/4″ tall.

I would definitely consider this a versatile miter saw. It only weighs 34 pounds, and it has a built-in carry handle, so you can lock it down with the lock-pin and pick it right up. Easy to carry, move around, and store away when it’s not needed.

The dual bevel plus the sliding features add quite a bit to its ease-of-use and cutting capacities. Anything less would only take away from its well-rounded versatility.

Add all of this to the fact that it is completely cord-free, and you have yourself a miter saw that can handle almost any job, anywhere.

Who it’s made for

At the low to mid price range, this model is priced for a wide variety of users. While I would not consider this economically priced, it’s still less expensive than may other premium models on the market today.

Plus with the sliding feature and the fact that its cordless technology, it’s really not priced bad at all, and that makes it a more practical power tool for beginners and professionals alike.

Overall though, it’s mostly going to appeal to professionals and DIY homeowners, who would have a need for the battery operation on their projects. Hobbyists and woodworkers really don’t need to pay the extra cost of the cordless feature, as they typically are working in an environment with plenty of available 120v power sources.

Ryobi offers their sliding fence feature on this model of cordless miter saw. This is common on miter saws with tall fences, and also on dual-bevel models (which this is). When beveled to the right, you’ll have to slide the right fence over to keep it out of the way of the blade. But it’s also useful when cutting crown molding and baseboard when you need some additional extended support of the workpiece. 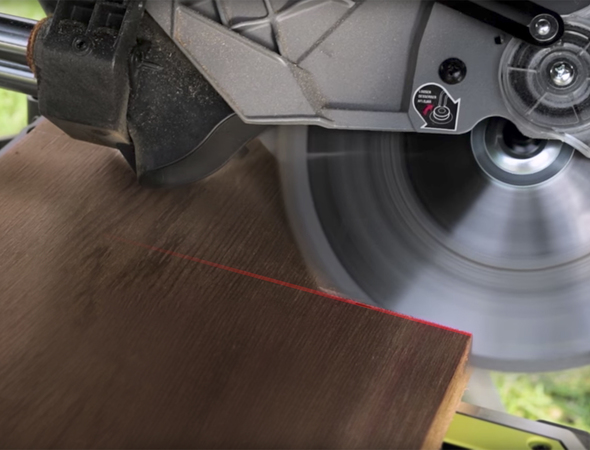 The laser guide comes on automatically when you pull the trigger. If you have the laser guide set up properly, which I detail here, you can make quick and accurate cuts with this feature. It helps to align the board quickly, without needing to hold the blade down against the piece. I personally use this feature on my miter saw quite a bit when making rough cuts. However, when the crosscut must be exact, it’s still best practice to line up the cut by putting the non-turning blade down against the pencil mark to get it just right.

This quickly stops the blade from spinning after releasing the run trigger. This is one of those features you really won’t notice once you start using the saw. It’s when the saw doesn’t have an electric brake that you come to appreciate this feature, as saws that don’t have it take a noticeably long time to come to a complete stop.

The manual for the Ryobi cordless miter saw is another good one. It’s tri-lingual, which is annoying, but at least the languages are not mixed together on the same pages.

The manual includes all the basics of operation, but it includes these nice additions:

Opinions Based On Real User Experiences

The vast majority of users love this saw. Many have been converting their associates and friends over to using Ryobi tools, based on this saws performance. It gets 5 star ratings on a regular basis online, and users continuously find themselves impressed by the battery technology, as well as the overall versatility and power of this lightweight cordless miter saw.

This model from Ryobi is a great tool for some professionals, and do-it-yourselfers. This is especially true for those on job sites that lack power, or for projects that are outside like decks, pavilions, and gazebos.

If you’re a professional that needs a miter saw with good capacities and versatility, while being able to work on job sites without power, this miter saw is a good fit.

However, if you don’t really have a need for the cordless feature, then you’ll be overpaying by going with this model, and you may want to consider a cheaper miter saw.

But in the end, it comes down to exactly that. Do you need the cordless feature? If so, this is likely a solid choice, and definitely, one that reviews show you won’t be upset with.