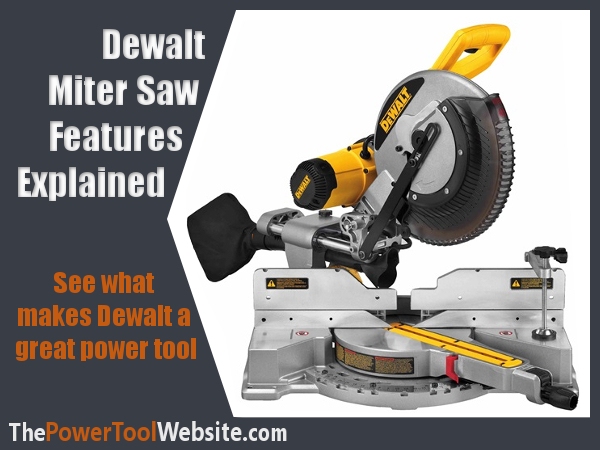 Dewalt miter saws have feet that are made to be mounted to your workbench. Bolted, screwed, or even clamped, this is a surefire way to keep the tool nice and sturdy while in use. The holes are sized so you can use different types of screws or bolts.

The electronic braking system kicks in about 5 seconds after you release the trigger. This dramatically reduces the time it takes for the blade to come to a stop. This is a safety feature, and it saves time as you won’t have to sit and wait to make adjustments or to get set up for the next cut.

The depth stop is a great way to do half-lap joints, or to cut dadoes and rabbets into the wood. These are both just fancy terms for grooves cut in the board that does not go all the way through. A dado is a groove cut across the grain. A rabbet is a dado or groove cut at the edge of a board. Here’s a good article on groove types.

Watch this quick video to show you how to use a depth stop on a miter saw. The demonstration is not with a Dewalt, but it works the same.

Some miter saw models Dewalt makes come with a feature called the Cutline LED. This is kind of a 2-in-1 feature.

First, it gives you great LED lighting for your cut. It lights up both sides of the blade so you can fully see the workpiece and the cut you’re about to make.

Seeing clearly at this point is very important, as when you’re about to make a cut, there’s really no such thing as ‘too much light’. So that by itself is really handy.

2nd, it casts a shadow onto the board you’re about to cut. This shadow is created by the blade itself. This is the exact location the blade will touch down on the board.

That means you can use the shadow line as positioning method for your workpiece. This is more accurate than a laser guide found on many miter saw models nowadays.

Also, since it’s a shadow of the blade, it doesn’t go out of alignment like a laser light can from time to time. Instead, you have a long-lasting, really accurate cut alignment system that also gives you great visibility from the bright LED lights. 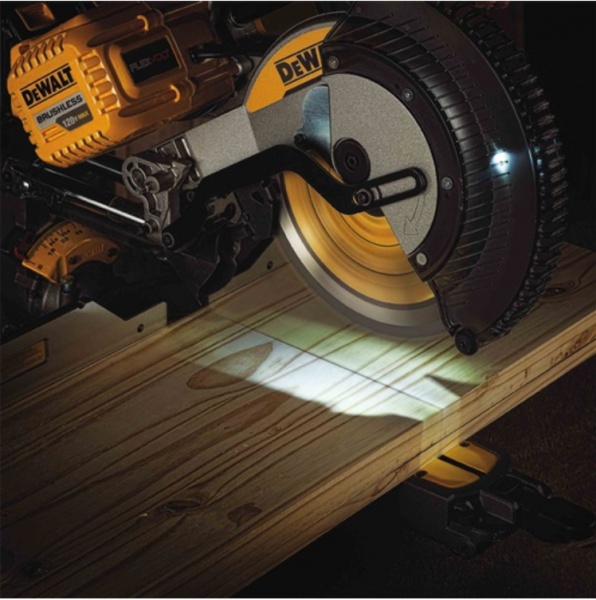 Dewalt miter saws either come with Single or Dual Bevel capability. If it’s single, then it tilts to the left. On these models, the left fence is extendable.

On the Dual-Bevel models, both fences are extendable. To adjust, you simply loosen the fence-lock knobs and slide the fence to the side. This feature is there to add additional back support when cutting larger board, especially vertical cuts and nested crown cuts.

Also, the fence has to slide out of the way when doing bevel cuts. 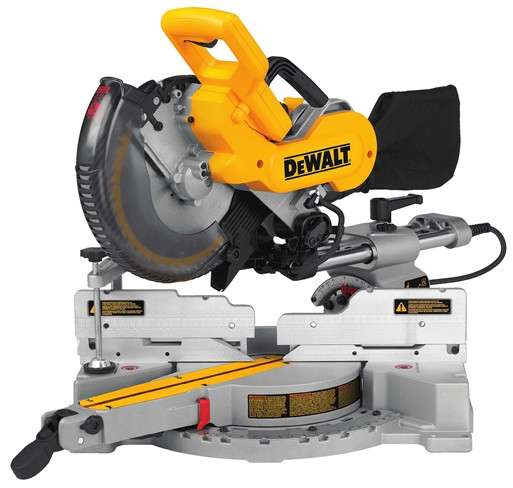 The Dewalt Flexvolt system, which I go into much more detail here, is a great feature if you need a cordless miter saw. They make the Flexvolt miter saw models as 10″ and as 12″ saws. The capacities are great, and the power is very impressive. The battery lasts a long time, and they even come with an adaptor so you can plug the saw in for use while batteries are charging.

You’ll have 2 – 60volt batteries that work in series, producing 120 volts of battery power. These batteries can even be interchanged with other tools, like drills, circular saws, and more. 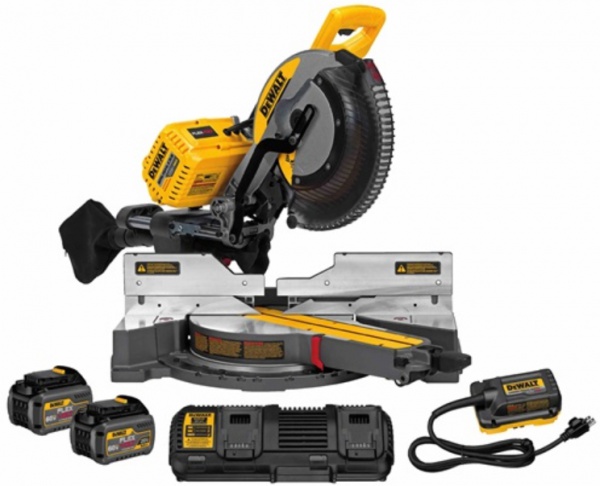 Dewalt makes the back fence feature so you can cut really wide boards. There is added time for set up when using this feature for really wide cuts. But for the ‘just-in-case’ scenario, it’s well worth it.

To complete this setup for using the back fence, you have to remove both sliding fences by removing the adjustment knobs completely, then the fences will slide right off.

You’ll have to build a 1-1/2″ platform to basically elevate your cut bed up above the remaining part of the fence, then the cut piece will hit the back fence ledges. Watch this quick video to see how it’s done.

Dewalts miter saws come with a 3-year limited warranty. This is a pretty standard warranty. They cover any repair costs associated with defects from the manufacturer. This does NOT include normal wear and tear issues. And obviously anything you simply break by mishandling the tool, well that claim would likely be turned down too.

The 3 years starts at the time of purchase, so if you are buying this as a Christmas gift for someone, don’t buy it in March and hide it in the attic for the bulk of the year. This will actually use up a big chunk of the warranty period!