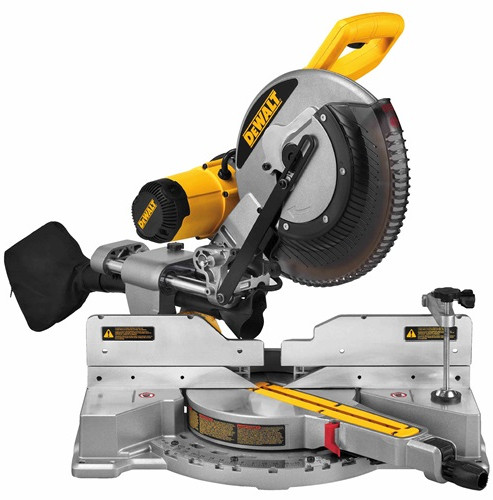 If you’re looking for a high-capacity Dewalt miter saw, keep reading. This is my Dewalt DWS709 review and from what I’ve seen, I think it’s a solid competitor and mostly worth the high price tag.

This saw has some really impressive features that allow for massive cut capacities.

It’s not a direct drive, meaning the motor is mounted above the back of the blade. This allows for decent vertical cut capacity, which I’ll detail below.

It’s got many of the benefits you can expect from a high price range miter saw, which this one is. But it’s still cheaper than the DWS780 which I reviewed here.

Like other Dewalt power tools, it comes with a 3-year MFR warranty, and a 1-year free service agreement.

Out of the box, this miter saw comes with a blade change wrench, dust bag, crosscutting carbide tipped blade, and a hold down clamp. 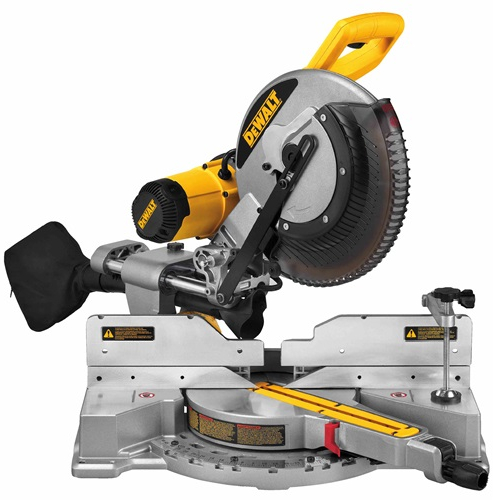 Dewalt DWS709 Review – What’s so great about it?

This 12″ miter saw from Dewalt has a sliding feature that gives it really great cutting capacities. This means you can cut through much wider boards without having to flip the board over to make a second cut.

It uses dual rails, solid metal components, and ball bearings for smooth sliding action that holds great accuracy for the entire travel of the cut.

This saw can handle most trim molding just fine. But this is not where it stands out. In fact, you’ll pay less for this saw, compared to Dewalt’s other 12″ slider. One reason for the discount is its reduced capacity for vertical baseboard and nested crown molding. 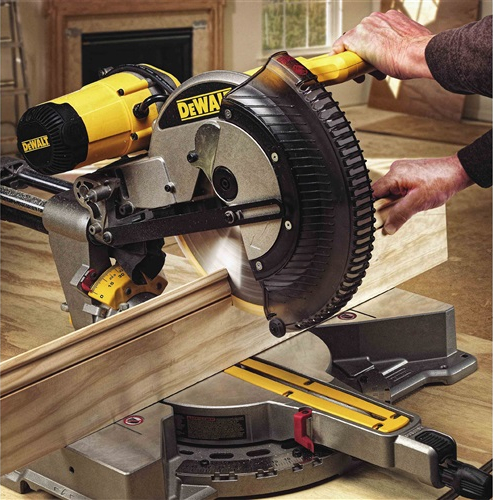 For baseboard, it can handle 4-1/2″ tall material, vertically against the fence.

For crown molding nested against the fence, it can handle material that is 5-1/2″.

While these capacities aren’t overly impressive for a 12″ saw, at least it’s got the dual bevel feature, which goes 49 degrees left and right. This means crown molding cuts are easier and you don’t have to flip the board every time you go from one end to the other. This helps to simplify the process and to reduce messing up a cut.

The capacities of this saw for most carpenters is really good. It’s got the Dewalt ‘Back Fence’ feature. This adds a little time to the cut setup, but it increases your crosscut capacity at 90 degrees to 14″ dimensional lumber. For most users, this means it can really handle any cut you want. 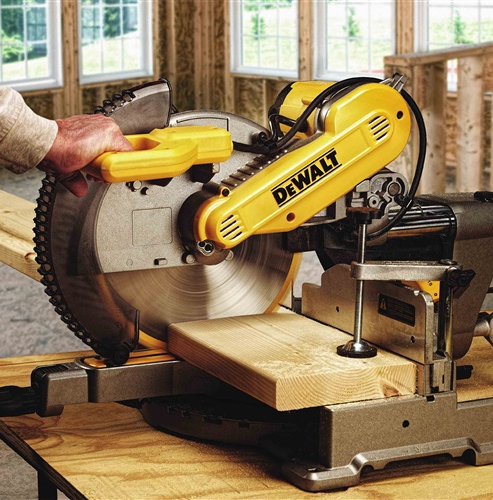 Even it’s miter capacity at 45 degrees is 10″ dimensional, which is really good and more than most people need for miter cuts.

The miter capacity for this saw is 50 degrees left, and 60 degrees to the right.

If you’re a woodworker, the Dewalt DWS709 really has a lot going for it. It’s got high capacity for crosscutting, which is great when building panels and doors.

Even large shelves can be cut in a single pass.

The dust port moves with the slide action, and the miter and bevel action. This makes it pretty useful, as long as you hook it up to a shop vac or a central dust collection system.

This is a well-rounded saw with high capacity, not overly heavy so it can be moved around for different projects and to different job sites easily.

It’s got features that make it great for many different trades, plus any DIY or woodworking project will really benefit from this saw.

It’s got most of the features I would expect and this makes it a very versatile miter saw.

Who it’s made for

It does lack just a bit for its class when it comes to trim molding capacities. So I would say for trim carpenters you may be better off with the DWS780.

But everything else it features makes it a great tool for most carpenters and woodworkers.

I think the Dewalt DWS709 is a bit high-priced for your most DIYers and hobbyists who need a miter saw. But that’s just my opinion. If you like Dewalt, and you want the impressive cutting capacity without springing for the really high dollar alternatives, then go for it.

Opinions Based On Real User Experiences

Overall, the Dewalt DWS709 review from users online has been really positive. It’s maintained a fantastic average rating on Amazon.

Most users agree that it’s got great sliding action, high cutting capacities that handle many difficult cuts, and the build quality is very impressive.

If you’re a carpenter or a woodworker, I would recommend this saw.

The exception is if you cut lots of large baseboard and crown molding, you can get better capacities elsewhere.

Dewalt has some really great features, like their ‘back fence’ that increases the crosscut capacity on many of their saws by a couple inches.

This Dewalt DWS709 is a somewhat stripped down version of the higher-priced DWS780. What you’re giving up is the really cool LED lighting Cutline system, and quite a bit of capacity for crown molding and baseboards.

But besides that, it still has just about everything you can expect from a high-priced 12″ sliding miter saw.

Because of that, it really can handle most jobs and projects. I would recommend it to about anyone, I just can’t say that the price tag will speak to a lot of casual users. But with the Dewalt name, the 3-year warranty, and the impressive list of features, if you decide to buy it, you will not be disappointed.